Last October, for the first time in our history, Colorado Horse Rescue was forced to evacuate the entire herd of 60+ horses during the nearby CalWood Fire. We rounded up every horse, loaded them onto a band of community trailers that had gathered down our drive, and evacuated them off the property to private barns and the Boulder County Fairgrounds for safekeeping. While CHR’s property remained safe, this evacuation made us think… how else can we better serve horses and the community during disaster? With the great help from ASPCA and the Sage Fund, CHR has taken planful steps to better prepare our equine community for the next emergency through education, action, and expanded equipment.

These funds allowed CHR to expand our emergency preparedness clinics and invest in a new truck and a four-horse stock trailer. This more agile equipment will allow CHR to navigate narrow roads when supporting equine evacuations in mountain towns that are consistently hit hardest during wildfire season. These grants also allowed CHR to provide the public with emergency equine evacuation skills, delivered through three free trailer loading clinics and our first free horse-handling training for animal control officers and first responders. While seemingly basic on the surface, CHR identified a need for the public to have free access to this education that could potentially save horses’ lives during disaster. 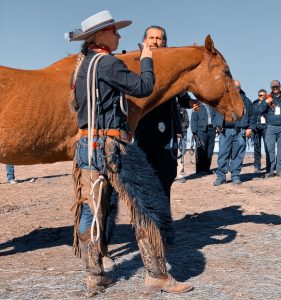 In a crisis, one of the most vital skills for horses is trailering ability. Safe and swift transportation is essential to evacuate horses quickly from a dangerous situation or seek immediate medical attention off-site. The problem is that many equines have a challenging time getting onto the trailer, or their handlers lack loading skills. A horse refusing to load is a hazard that can cause injuries or cost precious time during an emergency. Led by CHR head trainer Sarah Hofkamp, participants in the three free trailer loading clinics learned how to load horses during times of fear and aversion with hands-on training involving many of our rescue horses. With these three trailer loading sessions this summer, CHR equipped 72 community members with evacuation skills to use in the face of disaster.

CHR partnered with animal control and first responder agencies throughout Colorado to provide a free emergency preparedness clinic to officers that would be on the scene in a crisis. Alongside learning valuable skills, the attendees could apply this class to their needed educational credits. Designed to help both non-equestrians and equestrians alike, CHR helped the 20+ participants understand equine behavior, cover body condition scoring, and determine appropriate equine feed during emergency and non-emergency scenarios. The itinerary included hands-on experience with horses through catching, loading, and problem-solving alongside an in-depth lecture on vital health and behavior. This clinic received excellent feedback, with 100% of participants feeling better equipped to respond to an equine emergency in the future.

Following is a snip bit from a wonderful response that had been sent in from an Animal Protection Agent from Englewood, CO and Attendee of CHR’s first responder clinic:

“The training was great. The hands-on portion was one of the best I have attended in the last 5 years. What made your class different is you allowed the interaction in the large paddocks and did not limit it to a corral or pen. Also allowing us to work and handle horses that are not the most friendly was a key part of the training, as other organizations only let you train with mellow horses. Understanding the mindset of the horses, for example, they learn from the release of pressure, is something I wish I would have known growing up around horses as well as in the animal control field.” 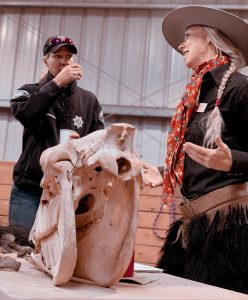 CHR plans to expand these clinics quarterly in 2022 to continue providing community education that will ultimately protect horses in a time of crisis.

With ASPCA and the Sage Fund’s remarkable funding, we can continue supporting our community by preparing Colorado’s horse owners and first responders to safely and swiftly respond to the next emergency. These partnerships have equipped Colorado Horse Rescue with necessary equipment to serve as a community evacuation resource. By acting preventatively alongside the community, CHR feels more than ready to come to the public’s aide the next time a crisis arises. Thank you to our partners’ continued support! 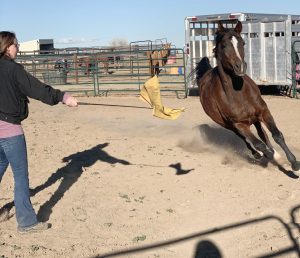 The Power of Liberty

Colorado Horse Rescue is pleased to host Patrick while he travels across the country, from California to Kentucky riding bridleless and completely at Liberty.