While in the profession of working with animals, there is always the somewhat unexpected risk of falling head over heels in love for (at least) one of the creatures. Horse trainers are absolutely not omitted from that rule. If anything, we fall into its extremities! One mare in particular has wriggled her way into my heart. Even though she started out as a challenging case, working with Riddle has proven to be a wholly rewarding and special experience. Today, I am extraordinarily excited to get the chance to share this story of CHR’s stunning Quarab mare, as well as her continuously amazing progress in training.

Colorado Horse Rescue was able to save Riddle through an auction intercept. Meaning, that even though her owners had intentions of bringing her to the local livestock auction, we were able to intervene before she ever set foot onto that property. Based on the background we were given, we believed that she would be a confident riding candidate. Yet, during the evaluation process, her personality showed a mare with countless insecurities over human beings, both on the ground and in the saddle. She came in as a distraught horse in need of high levels of support in order for her to feel safe in her environment. When support was lacking, she would become nearly uncontrollable as she turned frantic and frenzied. If flight wasn’t working, in some cases she would often times resort to shutting down, becoming seemingly quiet though very far away mentally. It was heartbreaking to watch her go through this self-made coping mechanism as she tried to distance herself from us in any way that she could manage. 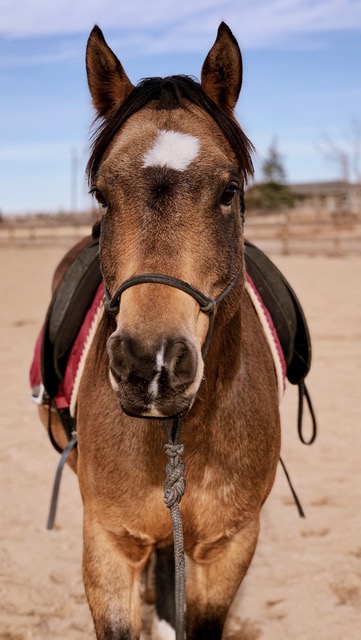 When it was time to bring Riddle up for consistent schooling, I decided that the best course of action was to restart her and see where her training was lacking. With hopes of building up her confidence, I could start from the beginning and fill in any holes in her education as we worked literally from the ground up. The first several sessions with her were difficult.

Riddle’s first reaction was to run around in a frenzy and call out, looking for someone to save her. Unlike many of the other horses that I’ve worked with at CHR, it was extremely hard to help her feel comfortable enough to even accept food from me – so positive reinforcement was a no-go during these first stages. I had to rely almost solely on pressure and release for communication, giving rewards only when she would accept them. It was only after a few weeks of exclusive groundwork that I began to see a shift in Riddle’s temperament. Her outbursts of anxiety were becoming less frequent as she was seeming to look towards me more and more for support. I was slowly able to build a thorough system of communication, both completely loose and on the halter. With her confidence in me growing, I soon felt that she was ready to move on to the next step: riding! I have found so much joy in my work helping Riddle become a reliable and self-assured horse. While she evidently had been ridden a great deal before she reached us, it was clear she still had many insecurities. For example, accepting steering as well as moving forward into larger gaits was extremely difficult for her.

With each and every ride she has shown huge improvements. Even though she still shows signs of anxiety now and again, with a handler that is confident she is quickly turning into a willing partner. Stay tuned into Riddle’s story! CHR has high hopes for this mare and her journey. In the future we plan on taking her out on field trips to expose her more to the world and hopefully prepare her for a successful riding career.

A Holiday Homecoming for the Unbranded Horses, JR and Bam Bam!

JR and Bam Bam, once wild BLM Mustangs, were stars in the movie Unbranded where they made an epic 3,000 mile journey border to border from Mexico to Canada through our public lands.

Here is another installment from the Colorado Safari Properties blog about our handsome Valiente!