On the Colorado Horse Rescue’s property there lives a beautiful horse with a very special tale. If you have been following our training blogs thus far (or even just happen to know me – hi, I’m Susan, Equine Trainer at CHR!) then you already know her name: Riddle . Over the past couple of months I have been on a long and rewarding journey with this little mare, one that I truly believe to have been life changing for the both of us. The main goal in her training may have been to help her learn how to trust and build connections with humans, yet along the way she had also become the teacher. From her, I encountered various lessons on what it meant to have true patience, empathy, and immense gratitude for each and every step we took forward.

Thus far, Riddle had progressed from an anxious horse that held very little confidence in others to a trusting riding partner who happily took direction without fear of consequences. Even though she knew the basics of riding when she came to CHR, she still had much to learn. Last we discussed Riddle, she was learning the beginnings of developing self balance. The first steps we took towards completing this objective were to form a soft feel, teaching her to be responsive in her face and to not actively pull back on the reins. This helped her become more sensitive to guidance which would eventually become important when it came time to ask for different riding exercises later in her training. In the next step, it was crucial to develop her awareness of the seat and legs of her rider.

Initially, it was clear that Riddle was highly insensitive to her riders’ leg cues. She struggled transitioning into the faster gaits, especially into a canter. As we will discuss, this could have been for a number of reasons, one being a fear of moving forward – whether from inappropriate riding or consequences in her past. She also had a habit of dropping her shoulders improperly while turning corners, which would have matured into tripping or even falling at higher speeds if we had not dealt with this properly in her early stages of training.

Like nearly everything with horses, the fair release of pressure was the key! Just as we learned how to help a horse with a hard mouth, one reason that horses become dull to a rider’s leg is the overuse of leg pressure. Without a release of pressure, even when the horse performed as desired, she would typically become used to it (or “dull”) and no longer react appropriately. 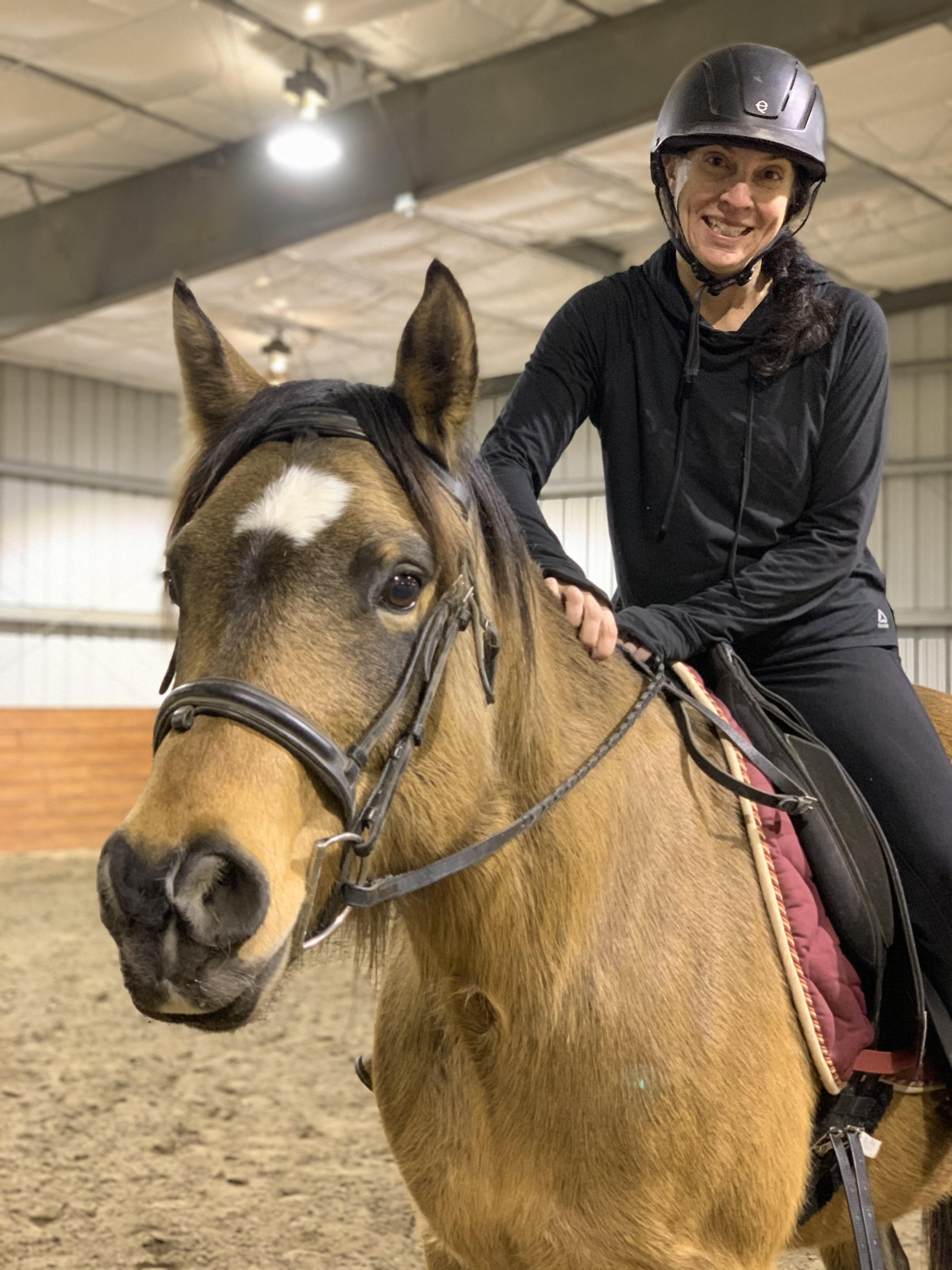 Riddle is shown here with her volunteer rider as she becomes more comfortable with pressure from people other than Susan!

Whether it was fear, or simply an uninformed rider that had led to Riddle’s unresponsiveness, I was able to aid her by using a simple method. When I wished for Riddle to move out more, I would always start out by asking with the least amount of pressure first: my seat. This was done by allowing my hips to sway even more than her gait would have naturally allowed. If there was no response from this, then I would move down the leg and add pressure with my thighs next. Again, this process would continue, applying more and more pressure down the leg if she continued to ignore me. As soon as I recognized any response from her in the correct direction, I would immediately remove all pressure as a reward. I was also able to use this method to guide her in lifting her shoulders when asked, by applying individual leg pressure and releasing when she moved in the opposite direction. The better that Riddle understood there was a release available to her, the quicker she would seek it out. With this exercise, I was able to help Riddle become enthusiastic about moving forward and diminish her fear of punishment.

Riddle has come a long way and she is only getting started in her journey! She is continually learning more and more about how to trust. With her personality blooming into a wonderful partner, she is quickly drawing loving eyes. Stay tuned as her story continues to unfold!

The Evolution of Sven

If you have stepped foot onto the Colorado Horse Rescue Property within the last couple years, then our next training spotlight hardly needs an introduction.

Over the last couple of months I have found so much joy in working with a special Quarab (Arabian/Quarter Horse Cross) mare on the property named Riddle.